December 13th 2018.
Our AGM was held at the Bonded Warehouse. The committee was re-elected & we are pleased to have a new President for 2019 – Jo Allen. Many certificates were awarded for work that has been submitted throughout the year. 3 members of the General group have been promoted to the Advanced section; they are Paul Robinson, Dave Tomlinson & Stuart Hancox. Tanya Skelding also received the ‘most improved photographer award. Congratulations to them all.

November 8th 2018
We had a very successful evening playing ‘Match an Image’ against Hagley & newcomers Web Heath. Due to a mix up with the rules for scoring a draw was declared! It was great fun & especially successful thanks to the sense of humour of our judge Steve Clifford. See you all on October 31st next year.

November 7th 2018
We are very pleased to hear that one of our younger members Paul Robinson has been shortlisted in the British Photography Awards. He has entered a drone image from his recent trip to Iceland. Good luck Paul.

Also Phil Turner has been successful in the Birmingham Photography Festival competition. People were asked to submit images taken around the city. He was one of the 8 winners and his prize is 3 hours in the penthouse apartment in the Rotunda this weekend where he can take sunset shots (hopefully) of the city. Fantastic prize.

September 27th 2018
Our annual battle versus Web Heath Digital camera club took place. There was a very strong set of images from both clubs & sadly for us Web Heath emerged victorious! Final score was Stourbridge 358, Web Heath 369. Thanks to Terry Livesey for judging.

August 16th 2018
Our first ‘Question Time’ evening involved a panel of our 6 Advanced members answering questions on anything photographic. The evening went well & we all picked up some useful information.

July 26th 2018
A ‘bit too close for comfort’ win in the battle against Great Barr, ( by 2 points ). Stourbridge needs more portrait images in its portfolio.

July 12th 2018
12 Stourbridge supporters travelled to Stourport to attend the annual inter-club battle. The contest was judged by Mike Sharples. Each club won one round but the final score was a victory for Stourbridge with 341 points vs 328 for Stourport.  🙂 We will welcome them to our venue for the return match next year.

June 7th 2018
A very pleasant evening was spent at ‘The Squirrel’ in Alveley with good food, good company & skittles. The first round was won (by a complete fluke throw) by Brian; the ‘knockout’ round was very close between Shaun & Simon – Simon was the eventual winner!

May 11th 2018
More Stourbridge members’ success. Alison Dean has just gained her BPE 1 crown award whilst Brian Dean is racing ahead & now has a BPE 2.

May 4th 2018
The Ladies of Stourbridge Photographic were very pleased to have been successful again in the annual battle against the Gents. Images from both teams were excellent but the final score was Ladies 472, Gents 443. Our thanks go to Ralph Duckett for great judging.

May 3rd 2018.
We are very pleased to hear the news that Heather Woodhams has recently enjoyed success in the prestigious London Salon. She has had 2 prints accepted: ‘Wayside Flowers’ & ‘The Pink Coat’. Only 177 images were accepted. Even better: ‘Wayside Flowers’ was also awarded A London Salon medal-one of only 9 awarded.  Congratulations Heather-well deserved.

March 8th 2018.
Our winning streak was a little dented last night when we finished in 4th place at the annual 5 a-side battle. Droitwich were the worthy winners with Bromsgrove 2nd, Wall Heath 3rd, Stourbridge 4th & Kidderminster 5th. Congratulations to Droitwich & we’ll see you all next year.

February 22nd 2018.
We have just received our Midphot results and were delighted to find out that 9 of our members had submitted images that were accepted.

It was especially good that 2 members had acceptances on their 1st time of entering.

February 6th 2018.
We had our first battle of the year last night at Dudley Camera Club’s venue. This annual battle involves Stourbridge vs Dudley, Wall Heath & Hagley. It was very close but we managed to win with a score of 286 points. Wall Heath were second with 281; just one point behind with 280 were Dudley and Hagley finished with 243 points.

Our thanks go to Dudley for hosting & to  Ralph Duckett for his judging.

December 1st 2017
Congratulation go to Brian Dean who has just earned himself the title of BPE 1 after having 25 acceptances on the British Photographic Exhibitions circuit.

November 23rd 2017
Our last practical evening of the year saw Stourbridge members having a go at capturing images of water drops, water bubbles, a Newton’s Cradle & giant floating bubbles; And impressively we didn’t make too much of a mess!! We expect to see some of these ‘Arty Abstracts’ in Open Club Competitions in the very near future!

November 9th 2017
Hagley & Bromsgrove joined us for the annual ‘Match An Image’ evening here at Stourbridge. After much banter & hilarity (especially ‘ref’ heckling from Hagley) we are pleased to report that Stourbridge won the challenge. The judge Graham Heywood made the evening especially successful.

October 19th 2017
Our winning streak in the interclub battles continues. Stourbridge were victorious over Wolverhampton by 17 points. 🙂 Thanks go to Graham Walton for his excellent judging. We look forward to the re-match at Wolverhampton early in 2019.

September 26th 2017
We were very pleased to win our annual battle against WebHeath Digital camera club last night. Against some strong opposition we finished with 419 points to WebHeath’s 400. The judge was Phil Cooling & we were made to feel very welcome at WebHeath who supplied us with delicious tea & chocolate biscuits. 🙂

We will be hosting this annual challenge on September 27th next year.

For the 10th Varna International Salon she entered 4 images into the ‘Face & Body’ category and 4 into the ‘People’ category; all 8 were accepted (marked 21 or over).

August 20th 2017
Stourbridge member Trevor Dean has had one of his lovely Yorkshire images ‘Winskill Tree’ accepted for the Yorkshire Dales Millennium Trust 2018 calendar. It will also soon be published on their website. Congratulations go to Trevor.

Clare Chamberlain had 2 images accepted in the local Midlands Salon; they were ‘Flower Girl’ and ‘Herculean’. She also had all 8 of her entries accepted into the Varna International. They were ‘Howdy partner’, ‘Mother’s love’, ‘Victoria Plum’, ‘Snow White’, ‘Fleur’, ‘Herculean’, ‘Quiet strength’ & ‘Flower girl’. ‘Fleur received a GPU Honourable mention.

July 20th 2017
A home match, our annual battle against Stourport Camera Club, mix of prints and projected images. A rather nice win for us but it would have been better if more of our members were present.  🙂

July 6th 2017
An away match, our annual battle against Great Barr Photographic Society. A rather nice win with a good attendance from Stourbridge members.  🙂

May 5th 2017
Stourbridge PS is delighted that one of our Advanced members Clare Chamberlain is achieving great success with her images entered into various salons. So far this year she has had 4 images accepted into the Bristol Salon (A silver medal for one & another an Honourable mention); 2 accepted into the Photography club of Arizona exhibition and 3 acceptances in the 94th Scottish International. Congratulations go to Clare.

April 20th 2017
Stourbridge Ladies are pleased to say that they had a sweet victory, winning the annual Ladies vs Gents battle (prints & DPIs) by a considerable margin of 50 points. 🙂 Until next year……….!

March 9th 2017
Another successful evening for Stourbridge at our annual 5 a-side battle vs Bromsgrove, Droitwich, Kidderminster & Wall Heath. Each club submitted 5 prints & 5 DPIs. The competition was fierce & we won by just 1 point!

Our thanks go to the judge Ralph Duckett.
We’ll see you all next year for a re-match.

March 4th 2017
Excellent news for SPS as we have 6 members who have had images accepted into Midphot.

February 6th 2017
A four way, away battle against Dudley, Hagley and Wall Heath. Each club submitted 8 images each, of prints and DPIs.
1st Stourbridge 🙂
2nd Dudley
3rd Wall Heath
4th Hagley
We did particularly well with our prints.

January 20th
The funeral of Arthur Fletcher, a club member for many years.

November 3rd
In spite of our projectionist, the ‘Match an Image’ competition against Hagley and Wall Heath was a success for Stourbridge. A really fun evening with lots of banter from all teams and enthusiastic judging from Trevor Bell. This year we have won all our inter-club battles.  🙂  🙂

October 25th
It took eight years to get a positive result but in this away battle against Wolverhampton Photographic Society we eventually won. Just by 3 points but it was still a win. 🙂

September 15th
The annual inter-club battle with Webheath Digital Photography Club, 50 projected images judged by Ken Hudson. We won but by a single point, 382 to 381.  🙂   a close call!

September 1st
With a collective sigh of relief, the Gentlemen were victorious in the Ladies v Gents, DPI and Print competition. 😉

July 21st 2016
Annual battle between Stourbridge and Stourport Camera Club, judged this year by Dave Tucker. A good turnout from the Stourbridge members saw a satisfying win for us. 🙂

June 16th 2016
Flooding! After that day of steady downpours, the car park was a little damp. This picture shows why the lecture had to be cancelled. ( the van happens to be on the weigh bridge ). 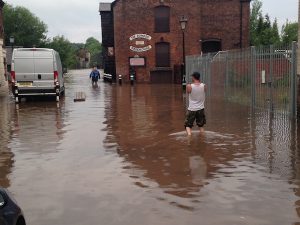 June 2nd
Thirteen members went for a 2 hour, 3.5 mile walk taking in Eymore Wood, Trimpley reservoirs and Upper Arley with riverside paths and geocaching for Heather plus a vintage car, swans, swifts and wild orchids. All this, plus sights for future train and fungi photography in the autumn.

February 11th  2016
We hosted a ‘5 a side’ battle with Bromsgrove, Droitwich Kidderminster and Wall Heath. Each club entered 5 prints and 5 DPI images. Judge: Graham Walton
1st Stourbridge
2nd Droitwich
3rd Bromsgrove
4th Kidderminster
5th Wall Heath
Got our own back for last year  🙂

November 5th  2015
The ‘Match and Image’ battle, at home against Hagley and Wall Heath. As Hagley are a new visitor to our society, we decided to be generous and let them win.  🙂
1st Hagley
2nd Stourbridge
3rd Wall Heath

September 24th  2015
Battle at home with Wolverhampton Photographic Society, 10 Prints and 10 DPIs from each club, the judge was Peter Gennard.  A narrow defeat for us I’m afraid, oh dear.  🙁

September 14th  2015
An away battle between Stourbridge and Webheath, comprising 25 DPI images from each club. Rather pleasing win.    🙂

July 30th 2015
Battle between Stourbridge and Stourport, ten prints and DPIs from each club. Judged by John Cartledge.
A satisfying win for us.  🙂

July 2nd 2015
Battle between Stourbridge and Great Barr.
A clear win for Stourbridge.   🙂

4th April to 6th September 2015
Himley Hall exhibition
Over the next 5 months we are holding an exhibition of our photographs at Himley Hall. This is a mixture of prints and digital projected images from most of our members.

9th December 2014
The funeral of Phil Waldren, a club member for over 42 years, most of that time on the club committee, a superb darkroom worker and landscape photographer.

23rd October 2014
‘Battle of the sexes’ a DPI competition between the gentlemen and ladies of the club.
Hampered by a biased judge, the gentlemen had to acknowledge an unfortunate defeat.  😉

27th September 2014
This was our  Open Day at the Bonded Warehouse.

We had displays of current print and projected images from a wide range of our members. We hope all our visitors had an enjoyable visit.

March 2013
The Society will be participating in the local clubs day at the Ryemarket on Sat 23rd where there will be an opportunity to meet and chat to members and see some of our pictures.
There is to be a  day out with cameras on the 24th March at Black country museum. This will be an ideal opportunity to polish your camera skills with experienced photographers on hand to help with any problems or questions.